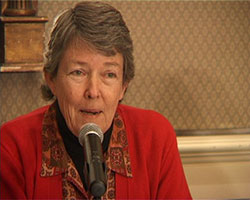 Secretary-General Emeka Anyaoku nominated me a Commonwealth Observer to South Africa’s 1994 April elections. I could hardly believe my good fortune. He said he had simply informed President Mugabe of my appointment. Other observers from Zimbabwe would be chosen by Zimbabwe’s Government.

Our teams were dispatched in pairs, each with a car and driver. We were all in place days before the elections started. Whoever selected our areas seemed to have done so on the basis of the hotter the better. So my colleague, the late Honourable Oki Ooko Ombaka MP from Kenya, and I found ourselves among those covering Mpumalanga, a sprawling, partly rural, partly urban area sections of which fell under the governance of KwaZulu-Natal. These areas were bitterly contested by the African National Congress and the Inkatha Freedom Party.

Over the elections it was striking how ineffably proud the vast electorate was. I couldn’t help smiling at one poor, thin young man marching like a soldier out of a dim little schoolroom in KwaZulu after having cast his vote. He caught my eye, looked very startled to see me smiling at him, then he grinned back and raised his arm in a brief salute. That moment was indelibly printed in my mind.

Another was the final minutes of the election at Woza Moyo School. By the afternoon of Thursday 28 April we had watched the last of a little group of people getting their temporary voting cards to enable them to vote at Charles Memorial, a remote school set among the green and chocolate mountains of Mpumalanga. All was in order, so we climbed into the car to visit the next voting centre on our list. At that moment a young man in a white T-shirt with Pierre Cardin emblazoned in pink across the front came to car and said something to our driver.

“He says,” reported the driver, “that if we’ve got a camera we might like to go to Woza Moyo school where we will find the chairmen of the local branches of the IFP and ANC having lunch together. But we don’t have a camera.”

Procedures at Woza Moyo seemed to have been completed although officials were still in their places in case any last minute voters appeared. And there, on the stoep outside the voting area, stood Victa Sibisi, IFP, and Lucky Zwane, ANC, the chairmen of their respective parties in the Shongweni area of KwaZulu-Natal, sipping cokes and eating a plate each of sadza and meat. Someone had honoured obviously only them as no-one else had food.

We learned that as far back as 1989 the two men had brokered peace for their area amid the then surrounding carnage in KwaZulu-Natal. The peace had held. Sibisi had just sent a message to IFP headquarters in Ulundi that he was satisfied with the conduct of the election. The two men were now talking about consolidating peace and embarking on development, whatever the outcome of the election. We left them, our hearts filled with hope and pleasure.

Twenty years later, watching South Africa’s fifth general election on television in Bulawayo, I wished that Oki Ooko Ombaka was still alive. He too would have been rejoicing at the vindication of all our long-ago hopes for beloved South Africa.