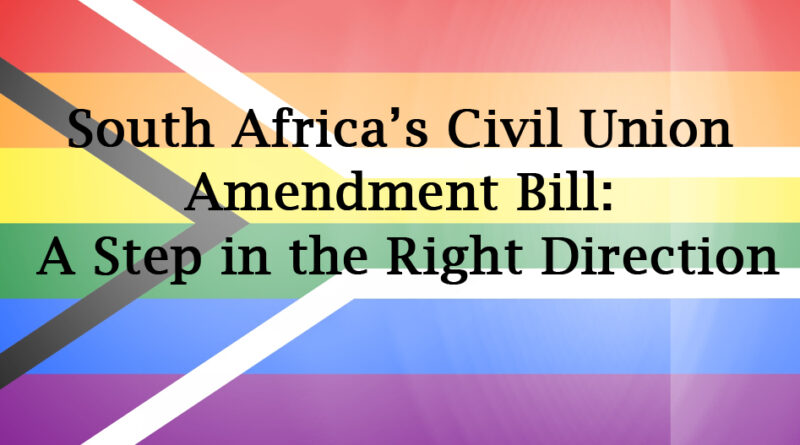 On 1st July 2020, South Africa’s second House of Parliament, the National Council of Provinces during a virtual sitting adopted an amendment of the Civil Union Act and was sent to Head of State President Cyril Ramaphosa for assent.

The adoption of this amendment was the culmination of a thorough legislative process embarked upon by the Parliament of South Africa, which included a comprehensive public consultation process, with expert submissions presented to the legislative body. This paper merely seeks to contextualise the latest victory of the LBGTIQA+ community in South Africa, and briefly explain the implications of the amendment bill.

In practice, this allowed civil servants to have the ability to refuse to officiate and solemnise the civil union of same-sex couples. Section 6 of the Civil Union Act of 2006 presented a legislative stumbling block to the realisation of South Africa’s Bill of Rights as enshrined in South Africa’s Constitution.

The refusal to solemnise the civil union of couples due to religious beliefs and moral convictions by state officials stood in contradiction with the constitutional aspirations of the people of South Africa. Whether directly or indirectly, Section 6 of the Civil Union Act 17 of 2006 created provisions where public servants may discriminate on individuals based on gender, sex, or sexual orientation. The amendment removes the state’s ability to discriminate based on gender, sex or sexual orientation, especially those that are delegated the task to solemnise civil unions on behalf of the state.

State Involvement in the Private Sphere of their Citizens.

The repeal stood to correct a long-standing injustice of having the state as a barrier for same-sex couples to express their commitment and love for one another as equal as heteronormative couples. The state standing as a major obstacle for equality for same-sex couples may be traced back to the colonial period, but for the purposes of this exposition, our point of departure would be the introduction of the Immorality Act of 1927 – which served to criminalise acts seen as indecent and was an attempt of entrenching conservative right-wing values by the Apartheid regime on South African society.

As the Apartheid project continued, the regime introduced the Immorality Amendment Act No 57 of 1969, this law was more explicit in its approach against same-sex couples, as section 20 A stated that,

“A male person who commits with another male person at party and act which calculated to stimulated sexual passion or to give sexual gratification shall be guilty of an offense”. [3]

These laws presented an existential crisis for the existence of black queer individuals, as the intersectionality of the state’s repressive legislative framework placed the greater burden of oppression on one’s identity.

The realities of the intersectionality of the state’s repressive machinery were captured by Anti-Apartheid Activist Simon Nkoli argued that,

“when you’re on trial against the state, you are a witness for the defence. I thought the state might know I was a gay person and would try to use my homosexuality to attempt to discredit me or to discredit my co-accused”[4].

In Nkoli’s analysis, one can see how the state had weaponised one’s race and sexual orientation as intersectional sites of oppression in order to sustain the Apartheid regime.

The anti-apartheid struggle was not only for the liberation of black people, but it was for the liberation for all to live to the best of their human potential. Therefore, South Africa’s democratic constitution reflects these aspirations of a united, free, and prosperous nation.

While the amendment of the Civil Union Act presents a major victory for the LGBTIQA+ community in South Africa, major stumbling blocks for the full realisation of the aspirations of South Africa’s constitution remain. This includes the change of social attitudes towards the LGBTIQA+, addressing gender-based violence, and comprehensively dealing with social inequality. These will require far more than just legislation, as they will require political will power and a nation united in addressing its intrinsic social challenges.

[2] Constitution of the Republic of South Africa, 1996. Chapter 2: The Bill of Rights https://www.justice.gov.za/legislation/constitution/SAConstitution-web-eng.pdf